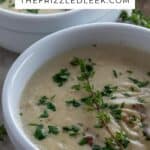 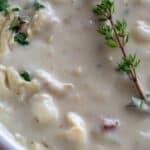 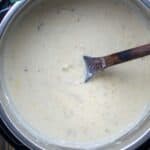 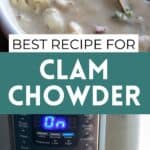 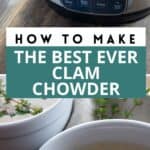 Instant Pot Clam Chowder is so creamy and delicious! We took the traditional route to develop this recipe except for heavy cream. We swap it out for a cashew-coconut cream for a dairy-free option.

I remember in Culinary School, one of my favorite classes was American Reginal Cuisine. The United States is divided into regions like Tex Mex, Central Plains, New England, etc. We partnered up with 2-3 classmates and chose our desired region. Each week a team would teach the class history of their region, and we would cook five recipes.

I remember learning that clam chowder is traditionally made with onions, bacon, potatoes, clams, clam juice, and heavy cream. What about celery, you ask? Nope, there is no celery in classic clam chowder.

Needless to say, Clam Chowder is one of the GOAT (greatest of all time) soups, in my opinion. Not healthy by any means, with the base being milk or cream-based. I wanted to make this recipe quick, easy, and dairy-free. So after 3-4 attempts, I landed on this clam chowder recipe.

The instant pot is a game-changer, and you can bust out any soup in 10 minutes! If you are a busy working Mom or Dad. Putting dinner on the table quickly is a MUST. To make this recipe dairy-free, here enter's a coconut-cashew sauce. One of my favorite food bloggers 40 aprons , uses this cream sauce in her Chicken Pot Pie Soup, and it's so good.

If you want to cozy up to some great soup and stew recipes, check out my butternut squash soup, or my one-pot salmon stew.

What makes this instant pot clam chowder so good

How Clam Chowder Is Made

Making Instant Pot Clam Chowder is so easy! Here's how to make it:

Hint: If the soup is not thick enough you can make a slurry with 2 tablespoons of arrowroot powder and 1 tablespoon of water. Pour slurry into the soup and hit the saute function. When the soup reaches a bowl it should be nice and thick.

How to store and reheat instant pot clam chower

Instant pot clam chowder is the best to enjoy fresh! However, it's possible to store, freeze and reheat.

To Freeze: Pour the cooled clam chowder into freezer bags and allow a few inches for expansion. Make sure to label and date the soup so you know how old it is. Clam chowder will last 3-4 months in the freezer. You can also place soup into freezer-safe containers with a good sealing lid.

To Reheat: Place clam chowder into a pot and heat gently on the stove. Make sure not to bring to a full boil to prevent scorching. Alternatively, place soup into a microwave-safe dish. Heat on 70% power for 5 minutes or until hot. Tip - I found out that reheating food at 70% or lower works like a charm. Full power will give you cold and cold spots, not warming your food evenly. This is a great technique if you are reheating a piece of fish where you don't want to overcook and dry it out.

How to make clam chowder thicker?

You can make a slurry out of cornstarch or arrowroot starch. We went the arrowroot starch route since it's paleo-friendly. Combine 2 parts starch to 1 part water and mix into a paste. Add the slurry and bring it to a boil. The soup should thicken up right away.

What clam chowder is red?

Why is clam chowder served on Fridays?

This goes back to the days when Catholic Christians were forbidden to eat meat on Fridays. Today during lent, Catholics avoid meat on Fridays and enjoy Fish instead. 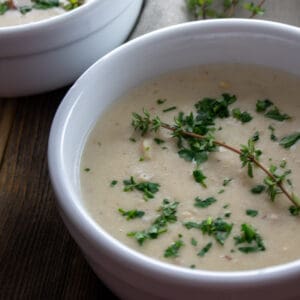 Make sure to add clams at the very end of the cooking process.  Clams can turn tough and rubbery quickly.   Cut potatoes into medium-large pieces.  If you cut the potatoes too small they will disappear into the soup.   Making the arrowroot slurry makes the soup nice and thick.
Keyword clam chowder, clams, fall food, instant pot, instant pot clam chowder, quick dinners, winter dinners
DID YOU MAKE THIS RECIPE?Leave a comment below and share a photo on instagram. Tag @thefrizzledleek and hashtag it #thefrizzledleek.

I'm a chef, husband, and father of two beautiful girls. The Frizzled Leek is a blog about getting families back in the kitchen. Here you won't just follow recipes, you will be developing your cooking skills too!

This website uses cookies to improve your experience while you navigate through the website. Out of these, the cookies that are categorized as necessary are stored on your browser as they are essential for the working of basic functionalities of the website. We also use third-party cookies that help us analyze and understand how you use this website. These cookies will be stored in your browser only with your consent. You also have the option to opt-out of these cookies. But opting out of some of these cookies may affect your browsing experience.
Necessary Always Enabled
Necessary cookies are absolutely essential for the website to function properly. These cookies ensure basic functionalities and security features of the website, anonymously.
Functional
Functional cookies help to perform certain functionalities like sharing the content of the website on social media platforms, collect feedbacks, and other third-party features.
Performance
Performance cookies are used to understand and analyze the key performance indexes of the website which helps in delivering a better user experience for the visitors.
Analytics
Analytical cookies are used to understand how visitors interact with the website. These cookies help provide information on metrics the number of visitors, bounce rate, traffic source, etc.
Advertisement
Advertisement cookies are used to provide visitors with relevant ads and marketing campaigns. These cookies track visitors across websites and collect information to provide customized ads.
Others
Other uncategorized cookies are those that are being analyzed and have not been classified into a category as yet.
SAVE & ACCEPT