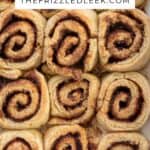 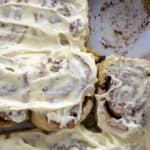 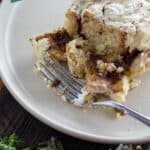 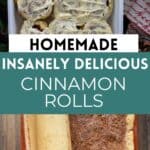 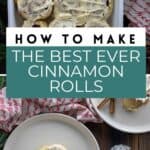 Our Easy Gluten-Free Cinnamon Rolls are the perfect Christmas morning treat! Enjoy watching your little ones opening presents with a cup of coffee and this delicious cinnamon roll recipe. Made from gluten-free flour and other traditional ingredients. Don't limit yourself to the holidays, this recipe is great all year!

Cinnamon rolls are yeast-leavened dough. Rolled out, coated in butter, and heavily dusted with cinnamon and sugar. The dough is cut into 1-inch slices and baked until golden brown. A cream cheese frosting is a popular way to finish off these tender morning danishes!

In the spirit of everything gluten-free, why not cinnamon rolls. A traditional cinnamon roll recipe, but we swap out the flour for a gluten-free option. We use butter and eggs to make an enriched dough. Making the dough rich, tender, and soft. Typically in baking, the more fat you add, the softer the texture will be.

The combination of apple cider vinegar and baking soda will give the cinnamon rolls a bit of a lift. If you don't have cider vinegar on hand, lemon juice will do the job.

You can make my gluten-free flour blend or try Bob's Red Mill variety.

What makes these cinnamon rolls so good

How to make this recipe

Making gluten-free cinnamon rolls is so easy, here's how to make it:

How to store and reheat gluten-free cinnamon rolls

How to Store: You can leave cinnamon rolls out at room temperature for 2 days. They will last 7 days under refrigeration and 2 months in the freezer.

To Reheat: I like to par-bake my cinnamon rolls at 300 degrees for 10-15 minutes. Place into an airtight container and freeze. When I am craving a delicious danish, I will pop them into a 350-degree oven for 10 more minutes, and they come out perfect. You can also microwave for 30 seconds on high power.

How long should you let cinnamon rolls cool before icing?

Let cool for 10-15 minutes before icing. If the cinnamon rolls are too hot, the icing will slide right off. Having a warm cinnamon roll will help soften the glaze and spread perfectly.

Why didn't my cinnamon rolls rise?

It's a good insurance policy to test your yeast before using it. I like to bloom my yeast in a warm liquid beforehand. If the yeast doesn't get foamy in 5-10 minutes you have bad or old yeast. A liquid above 120 degrees can kill the yeast. I like to activate my yeast at 110-115 degrees. The temperature of your environment plays a big role in proofing the dough.

Why are my cinnamon rolls hard?

Too much flour creates a dry and hard cinnamon roll. I like to hold back about a cup of flour and add it if needed. Slightly sticky dough is what you want.

Other dessert recipes to try...

Did you make this easy Gluten-Free Cinnamon Roll recipe? Please click the stars below to comment and rate this recipe! 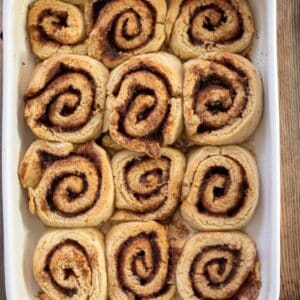 If your kitchen is cold, the dough will not rise. Find a warm place in your kitchen.  Some ovens have a proofing setting.   Greasing your bowl will help the dough rise. Gluten-free flour is dense and needs all the help it can get to double in size.   Make sure the milk is no hotter than 115 degrees, or you may kill the yeast. I like to heat my milk in 15-second bursts in the microwave until I reach the desired temperature. Use hands to press out dough instead of a rolling pin. This dough is delicate and can tear easily.  Using parchment paper or a Silpat helps roll the cinnamon rolls. To cut the cinnamon rolls, use a thin wire or dental floss to a clean cut. Brush with an egg wash to help with the browning. Waiting 10-15 minutes after the cinnamon rolls are out of the oven is the optimal time to add the frosting.
Keyword breakfast, christmas, cinnamon, cinnamon rolls, frosting, gluten free, holiday's
DID YOU MAKE THIS RECIPE?Leave a comment below and share a photo on instagram. Tag @thefrizzledleek and hashtag it #thefrizzledleek.
« Easy One-Pot Salmon Stew
Instant Pot Clam Chowder »

I'm a chef, husband, and father of two beautiful girls. The Frizzled Leek is a blog about getting families back in the kitchen. Here you won't just follow recipes, you will be developing your cooking skills too!

This website uses cookies to improve your experience while you navigate through the website. Out of these, the cookies that are categorized as necessary are stored on your browser as they are essential for the working of basic functionalities of the website. We also use third-party cookies that help us analyze and understand how you use this website. These cookies will be stored in your browser only with your consent. You also have the option to opt-out of these cookies. But opting out of some of these cookies may affect your browsing experience.
Necessary Always Enabled
Necessary cookies are absolutely essential for the website to function properly. These cookies ensure basic functionalities and security features of the website, anonymously.
Functional
Functional cookies help to perform certain functionalities like sharing the content of the website on social media platforms, collect feedbacks, and other third-party features.
Performance
Performance cookies are used to understand and analyze the key performance indexes of the website which helps in delivering a better user experience for the visitors.
Analytics
Analytical cookies are used to understand how visitors interact with the website. These cookies help provide information on metrics the number of visitors, bounce rate, traffic source, etc.
Advertisement
Advertisement cookies are used to provide visitors with relevant ads and marketing campaigns. These cookies track visitors across websites and collect information to provide customized ads.
Others
Other uncategorized cookies are those that are being analyzed and have not been classified into a category as yet.
SAVE & ACCEPT